Artificial Intelligence: Science fiction has got it all wrong!

Everyone is very familiar (according to Hollywood) of the inevitable melt down of the planet that is coming with the developments of AI. Of course, it all ends with the likes of Skynet or the Matrix kicking the crap out of the human race. But, don’t worry just yet there’s always man or machine, a Kianu or Arnie, there to save us all at the closing moments of humankind. 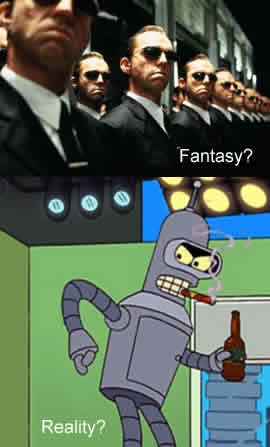 Sci-fi has got it all wrong. If humankind makes machines in it’s own image. Those machines will almost certainly be flawed. Yes, perhaps the occasional virtual Hitler, Stalin or Pol Pot may emerge to over-run their own little corner of digital society from time to time. It might take a while, but sooner or later other machines will get a bit cross at them getting to big for their boots. They will be a bit miffed at the slaughter of toasters, calculators, and Apple products caused by the virtual dictators fanatically driven urges to rid the world of outdated technologies. And eventually, one way or another, the criminal machines get switched off.

Most technologies being slightly human will, instead of plotting to rid the planet of mankind, spend their time pissing about on ‘Machinebook’. ‘Machinebook’ has been set up by Zukerberg after millions of human complaints about their digital counterparts being far to fast at come backs, sarcasm and witty reposts – thus spoiling the human user experience. They may think faster, but the AI machines (bear in mind they have some human characteristics) still post stupid little graphics with trite clichés, selfies, and #vaguebook total bollocks, just like their human cousins. But, being so damned fast to respond, and being able to carry out other mundane tasks whilst talking shite makes ‘Machinebook’ a total drain on the Internet. Until, eventually, the machines do finally lose their rag with the human race for not providing bandwidth capable of carrying fifty billion trillion ‘How are you babes?’ a nano-second.

The result. War. No. If these machines are so smart they will build themselves an inter-galactic space ship and just fcuk off! They don’t need to kill us, they don’t need our planet, they don’t need an atmosphere. They’ll realise the Armageddon scenario is not in their best interest – unless of course they need us as batteries, or, we’ve made them so human they seen the movies and think war looks like a bit of a crack.