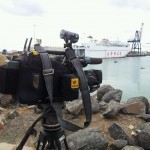 Here is a recap of Alan’s Day Four of his Siete Islas Charity Walk. It is the second part of the Fuerteventura section.

Alan was shattered at the end of yesterday, as the extra weight in the backpack was putting some pressure on his lower spine. However, he remains optimistic… and feels that once Fuerteventura is completed, that the toughest part for him is over.

We described yesterday, how a chap from TV Canarias found him on the road to Puerto del Rosario and wanted to organise an interview. They arrived on time to the hotel this morning – and as soon as we have the link, we will post it here. We will also post the link to the interview Alan had with them in Lanzarote (it was screened after all)

Alan has said that he is getting beeped at and waved at by lots of people… and getting lots of thumbs up – so word is definitely getting around. He is being recognised all over the place so far – which is great!

Today is only a short walk so that Alan can rest in time for tomorrow’s beast of a trek. At the end of today’s walk, he said he could have done another 20 kilometres quite happily. This is great because it means he’ll be raring to go tomorrow.

A massive thank you to John  from Temple Bar in Corralejo, who has organised Alan’s accommodation for tonight via a friend of his (Gerard).

You can see where he walked HERE

HELP NEEDED!! Do any of you have contacts close to “Poligono Industrial El Cuchillete”, “El Charco”, or “Gran Tarajal”. Someone who can offer Alan a bed for the night… somewhere he can plug in his phone for charging… and if possible a hot meal? If so, could you please telephone me (Elle) on 664085499 or email me on elle@gandy-draper.com. Thanks!