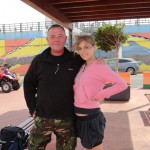 Here is a recap of Alan’s Day Twenty One of his Siete Islas Charity Walk.

Alan was up very early this morning – 4:45am to be exact, so that he could be ready in time to get the ferry from Santa Cruz de La Palma to Los Cristianos. Once in Los Cristianos he then had to wait until early evening to get a connecting ferry to El Hierro. Unfortunately, the La Palma to El Hierro route was discontinued recently… hence the double stage trip.

How lovely it was for him then… to get to see our friends Cathy and Stephen again… as well as their daughter Elinor, and their boxer dog, Oscar… in Los Cristianos, Tenerife.

Alan eventually arrived on El Hierro at about 8:30 – an hour after he was due there. Tonight he will be staying at the Boomerang Hotel in Valverde.

Tomorrow Alan will be setting off very early so as to fit to whole walk in one day. Although as the crow flies, it’s not a ide island.. the twsists and turns of the roads make it quite a hike.

Alan will be sleeping at Boomerang in Valverde again on Saturday night. On Sunday, he will fly from Valverde to Las Palmas… and then from Las Palmas to Fuerteventura. From there he will sail to Playa Blanca with Armas… arriving at approximately 8:40pm. A few of us will be welcoming him home – so if you would like to join us down at the ferry… please do so. After that… it is up to Alan whether he goes straight home… or nips into Popeye’s Bar for a quick drink instead. I guess we’ll play it by ear. If anyone has any urgent questions tomorrow, please just give me a bell on 0034 664085499… as I won’t be at the computer the whole time.

Today’s photos don’t come from Alan. Instead we must all thank Stephen from The Beach in Tenerife for taking them, and uploading them. Makes a change to see Alan the other side of the camera for once!!