I didn’t turn the TV on most of the day yesterday. I’ve been avoiding the news. I knew it would make me angry. Sure enough, I eventually gave in last night. Things were worse than I thought. Lauren Bacall had died too. The media, Facebook and Twitter has become a Hollywood death-fest. 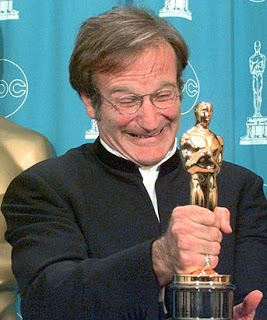 When I first saw the news of the death of Robin Williams I was as shocked as anyone. I have always greatly admired the man, he was hugely talented, very funny, and grossly underrated as a straight actor. I can relate to him in some ways as I’ve suffered from depression, on and off, all my life. But really, the airtime this is getting now is just insane.

He died on a day we saw a paralysed child in Palestine declare that she had dropped her ambition to become a doctor, and that the future she now sees for herself instead is ‘killing Israelis’.

Obviously the loss of Mr Williams is significant, but how is it the world can go into fcuking meltdown on the news of the demise of some individual who happened to be in a few movies and on TV?

Meanwhile the injustices and the murder of the innocent in Palestine, Syria, Iraq, Afghanistan, Ukraine and a hundred other places around the world run alongside, as they do each and every day, and are virtually relegated to the 30 second end of show slot normally reserved for the light and funny story.

To add insults to injury, within minutes of the news of Williams’ death BuzzFeed and its vacuous clones were hammering out link bait posts along the lines  ‘The Top 10 Robin Williams Movie Moments’, ‘7 Things Robin Williams Taught Us About Life’, and ‘Wow, I Saw This Robin Williams Clip And Was So Amazed I Fell Off My Chair’ looking to cash in on the demise of a legend.

Call me cynical if you must….

The world is ill, it’s sick, there’s something really, really wrong. It’s nothing new, it’s always been like this. It’s getting worse – not better…. I fcuking hate it.

Now if you’ll excuse me I have a meme to make of an insightful Robin Williams quote, and there’s a very important petition about the mistreatment of goldfish I noticed earlier on Facebook that I must sign.

Homeless woman in Almeria Before you ask. The answer will be a resounding NO!