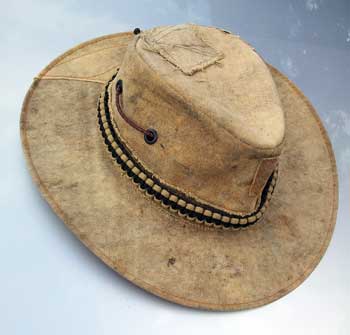 If you read this site at all you’ll probably, quite rightly, come to the conclusion that I tend to write for it when I’m in the mood for a rant or to have a pop at someone. This is one of those infrequent times that I’m going to break with that tradition and write something nice!

Having received some cash recently for my birthday and being told to treat myself. I did. To a hat.

I’m not really a hat guy but I do have a favourite baseball cap for the summer. Which, although shading my eyes doesn’t really provide decent protection from the sun, as proved by its use when I walked the length of the Canary Islands in 2012. By the time I arrived home my ears looked more like I’d spent a month in radioactive fallout than indulging in a rather pleasant 400km hike.

This is only a hat I hear you say. No it isn’t, to me it’s a thing of beauty. As I said, I’m not a hat person but for many years (given the climate I live in) I’ve been looking for a wide brimmed hat that;

This, after a couple of failed attempts is finally it….. The Tarp Hat.

My wife recently reviewed these on our Spain Buddy website, and the instant it arrived I knew I had to have one too. I’d have stolen hers, but it was far too small for me. I have a very large head as I need the the additional room to keep my extra brains in!

I won’t bore you with all the background. Here’s the short version of the story. The Tarp Hat is made in Brazil out of, yes you guessed it, old tarpaulins from trucks that have been travelling up and down the country. As well as being the perfect shape I’ve been looking for each one is unique and so well made  you just know it’ll last a lifetime. If you want to know the story behind them and the company that sells them have a look at Elle’s Tarp Hat review. If you’re tempted there is a discount code on the page as well as a link to the website of The Tarp Hat Company (they do other stuff too).

No, I’m not getting paid, I did pay for the hat (less the 10% discount), and no, there are no affiliate links here. These hats are just simply (I’m going to use a word I despise as it is unusually appropriate) awesome!

Britain First and the Islamic State