“Tell me about this puppy”? 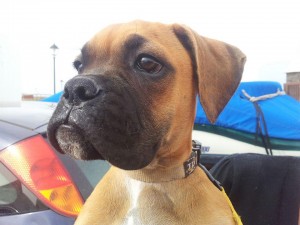 I’ve gone and done it again! Another doggy sob story, and after being plied (strategically) with wine by Elle I uttered those fatal words – “Tell me about this puppy”…?

Of course, by yesterday afternoon we were on our way to collect him. Here’s the latest addition to our COMPLETED family – Billy the Boxer. No more – three is more than enough! If I ever think of using the phrase again will someone please shoot me!

One of the appalling things about living on this island is that there are so many dogs mistreated and abandoned. Often by expats who arrive with their rose tinted glasses still on, who just rush into getting a puppy or kitten long before they have created any personal stability. Some, on failing to settle themselves, just abandon or dump their animals on the already over-stretched shelters.

We were horrified when we heard about this little chap – only twelve weeks or so old the people who had him can only have had him a few weeks. He was found by a friend of ours totally abandoned in the garden of a property he was renting to them. No water, little food, no shelter and they had pissed off to the UK just leaving him outside!

Little Billy as he’s now know was extremely lucky he was found on Friday. Had our friend not turned up at the house, we’ve been told that he probably wouldn’t have made it through the weekend.

How the fcuk can people do this – total scum. If it were the UK it would be possible to prosecute them – sadly here the laws are not as strict, and rarely enforced. There’s no more room at the inn now we won’t be able to help any more…

If you’re an expat, or aspiring expat, please, please don’t dash into pets – get yourselves stable first. It’s just cruel to take them on and then abandon them like this. Also, think twice before buying or going to breeders there will be plenty of waifs and strays like this little chap who will find their way to you!