There, I said it. Two words I’d never have envisaged myself using together unless preceded by the word don’t. However, desperate times call for desperate measures.

I’ve never made any secret of it – I don’t vote, and I won’t vote. However I’m often pretty vocal about UK politics despite the criticism I’ve often had saying ‘You live in Spain what the fcuk has it got to do with you? (The answer to which you’ll find here). My despair at the support that UKIP is getting grows by the day and is directly proportional to the huge number of seemingly funny but rather scary cock-ups hitting the news.

It appears that almost weekly for several months now that on top of Farage and his cronies normal gaffes, UKIP have almost weekly been dismissing member for ‘extremist views that are not those held by UKIP’. A lot of them! Already fuming about the racism and religious hatred, failing to support equal pay for women, the attempts to censor free speech and many other absurd behaviours, the last straw for me was the recent story about UKIP candidate Anna-Marie Crampton spouting holocaust denial.

To me, the sum of all this can only mean one of two things – that UKIP is genuinely off it’s trolley and are a far right organization trying to hide their motives, or, that this bunch of relatively harmless “mad, swivel-eyed loons” have been seriously infiltrated by the BNP or other extreme right elements.

Either way, the potential end result is not a pretty picture!

Back to my original point…

Most of my friends might be inclined to describe my own political views somewhere ideologically to the left of Lenin. So why did I start this piece with the words ‘Vote Conservative’? No, I’m not seriously asking everyone to vote for them – heaven forbid. Nor (being the post-punk armchair anarchist I am) do I personally support or endorse any of the other traditional parties. My plea is to those who are traditionally Tory voters. Please stick to your guns – vote for your party. If you think UKIP is protest vote you are falling into their grubby little hands. Don’t split the Tory vote by voting for these xenophobic, sexist, isolationist, neo-fascist nutters! They aren’t just eccentrics, they the thin end very, very dangerous, very big wedge.

Be careful what you wish for… 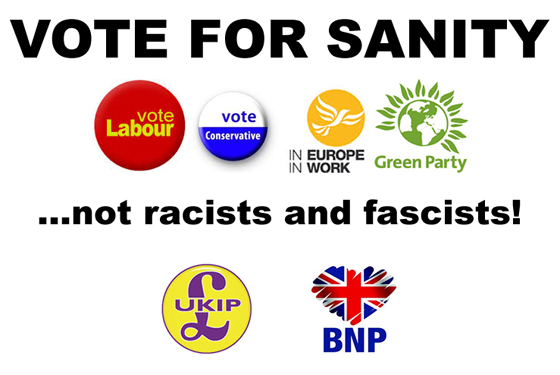 Artificial Intelligence: Science fiction has got it all wrong! FIFA to reveal a new specification kit for Russia 2018