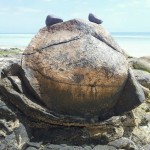 Here is a recap of Alan’s Day Seven of his Siete Islas Charity Walk. It is the fifth and final part of the Fuerteventura section.

Alan finished at Costa Calma last night… and settled in for the evening feeling tired but very ready for his last day on Fuerteventura. The madman actually considered getting straight on the ferry to Gran Canaria after today’s walk – but that would have meant he was wandering about in the dark… trying to find his hotel… when he was already tired and with backache. Fortunately he listened to good sense and agreed to stay in Morro Jable this evening. He will sail to Gran Canaria tomorrow (Saturday) teatime, and sleep at Las Palmas before starting the Gran Canaria walk on Sunday morning.

Alan has been buzzing today. He says that the south of Fuerteventura is stunning – and somewhere that I should organise for the walking group to visit at some point. The beaches are large… with white sands easing into the blue seas. He said one of the beaches was 3km long and 1km deep – like Papagayo but much bigger. He was a tad started when someone walked towards him with their (his word not mine) “knob” hanging out – but he did say that did wonders for his self esteem 🙂

Tonight Alan is staying at Apartamentos Matorral in Morro Jable. They are fairly central… and only a couple of kilometres from the ferry port.

You can see where he walked HERE.

He is now at the end of his Fuerteventura walk – the bit he felt would be the toughest!!! He is off to Gran Canaria tomorrow. Go Alan!!!