I’ve never been a fan of cats, as anyone who knows me will tell you. In fact – I hate the damned things… Selfish, useless little creatures that serve no purpose other than to spread germs – and irritate me! 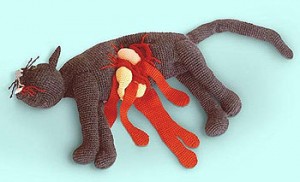 I used to be allergic to then when I was younger – I’m not now – but I still tell people I am so they’ll keep their precious little fluffy things away from me if I go to a cat owners house. Come to think of it, I may actually still be allergic. But, its been so long since I let one get near enough me to know whether I am or not.

How may cat owners do you know who protest the intelligence, and affection of their pets. In reality, they function on pure instinct, think their owners exist to provide for them – and serve no useful place in any society except their own. Okay, I can’t object to a cat owner who keeps their animal at home and looks after it responsibly – but don’t get me onto cats in those circumstances that are allowed to wander over food preparation surfaces.

But how many cat owners are responsible? How many let their pets wander into other people space to make their mess, or wander the streets to breed indiscriminately? Do I feel bad if I run one over in my car? No! I blame the owner.

In my home town there a so many feral cats that there’s a reasonable good argument for a cull. So much so I’m thinking of taking up as my mission to undertake the task single handedly… Despite the well meaning efforts of a local charity attempting to neuter them all – irresponsible cat owners still insist it would be ‘cute’ to let their little kitty have a litter of kittens. They don’t give even the slightest bit of thought to the massive over-population of the creatures, or the welfare of the resulting felines. And, of course the process simply repeats, and repeats and repeats… Cull them – that’s what I say.