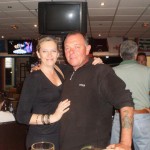 Alan reached Playa Blanca at 8:40pm yesterday as planned… and a number of friends and family were there to greet him, as well as the people from Canarias TV. We’ll post a link to the interview once they add it to their website.

After his interview and hugs from everyone that came to welcome him… we headed up to Popeye’s Bar in Punta Limones, where our friend  John Brindley was waiting with a large beer for Alan! He’d raced ahead on the pretence of moving his car ha ha! Cathi was working with another lady (sorry… didn’t catch her name) and looked after us all really well. We didn’t stay too long though, and soon Alan was walking through our front door ready to be bombarded by the dogs! They went berserk when they saw him obviously… although Billy Boxer did seem more pleased to see me than his Dad… but he is a Mummy’s Boy!

Today he has been catching up with emails… answering more questions from the Press… and has also popped into town to see a couple of people.

Here are a few links to just a few articles in the Spanish Press today. Many thanks to Irma, from Yaiza te Informa who has worked tirelessly to help with this – we couldn’t have done it without her!

We’re still collecting prizes for the Auction at Wax Bar on the 10th May… but remember you can also placed bids online before the event if you can’t make it there in person.

Right – I’m off to prepare dinner, so had better disappear.

Coming Home… Back to reality…