As a child, my granddad (Thomas Gandy) was my idol. I remember him as a little old man, apparently frail and ‘bow legged’, but if you looked further the man had the strength of an ox. If he rolled his sleeves up he had muscles like Popeye on a spinach high! I idolised him he used to sit me on his knee and tell me great stories about his travels in Canada – so spectacular to a child that you wondered whether he was making them up at times…. Cows and cowsheds being lifted by winds, travelling under the rails of trains – stories you might expect to read in something written by Jack Kerouak rather than to hear from your own grandfather.

To put you in the picture of the type of man he was, he was very gentle with us. I remember him most of the time sitting quietly in his chair as my grandmother would talk constantly. Boy could she talk – well, when she got the chance between bringing us constant supplies of cakes and ginger beer made and bought in specially for our regular visits. He was quiet – but you always knew who wore the trousers in that house!

I recall one time – as a child does – asking “Why do you have such big ears”? At which point (socially acceptable in those days) my mothers hand came from nowhere around the back of my head. He said calmly, but authoritatively, and with a suppressed anger I’m sure – “What was that for? The boy asked a perfectly reasonable question. I DO have big ears”. He took his gaze away from my mother, looked into my tearful eyes and answered the question as though nothing had happened. That was the kind of man he was.

I’ve told this story many times as I was told it by my dad – to the best of my recollection – over the years… But after writing recently about my uncle Fred passing away thought it was time to write it down.

There’s a part of me wonders if I should write this publicly as I don’t know how many others within my distant family don’t know the story… But it was never told to me in the sense of a dark family secret – it was just something my grandparents chose not to talk about when they were alive.

My grandfather had both a very tough, and a very charmed life at the same time… The story goes like this…

During the fist world war he tried to join the navy at age 14 or 15. His friend got in, but he was found to be to young and was sent away. His friend died first time out…

Between the wars in the early 1920´s he met my grandmother, big romance – until his family found out. For whatever reason – I don’t know – they didn’t approve. And, to demonstrate their disapproval packed him off to Canada to stay with relatives to get it out of his system. He was there for 10 years, but I’m told stayed in touch with her (The picture above was given to me when she died. He sent it to her from Canada and it stayed with her in her purse until the day she left us) . This is where his stories came from, he’d worked on ranches, travelled as a bum over the country riding the rails and stock cars, he’d worked as a lumberjack – he had experienced the world, and what could have been described as the frontiers of the times. 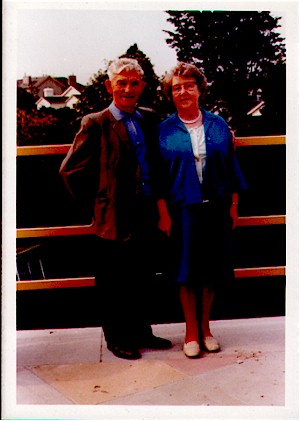 He returned, met my grandmother back in Liverpool – who had since (as I recall the story) been married, and widowed with two daughters. They married and had another daughter, and a son – my father – the youngest (now in his 70s)….

Many of his family never spoke to him again – he was one of 13 and lost touch I think with all of them, except in Canada.

Along comes the second world war – again he tried to join the army, but was turned away as to old this time. What did he do? He couldn’t do nothing – being in the building trade, he must have thought the best thing he could do to help was to travel to London where he helped clear up, and lived through the blitz.

When my grandmother died I was given a couple of pieces of her furniture, under the old newspapers that lined the draw I found a letter from him to her during this time. It asked about my father who had just been ill with pneumonia (he would have been about 5 at the time), it told her how much he loved her and the kids… He wasn’t articulate, but you knew it came from the heart. And, despite that was written in the most beautiful handwriting (everyone always commented on the way he wrote). The letter now is sadly lost – I’m hoping it turns up someday in a drawer again somewhere – perhaps even being found by one of my kids.

After the war, he worked, he lived a simple life, they lived in the same little council house in Huyton until the day they died. He died before my granny – who it always struck me had lost the will to live after she lost him. She went to spiritualist churches, she missed him, we all knew she was just waiting to be with him again. His life was unremarkable from this point, but you knew that was what he wanted, the simple things, breeding birds with my dad, caring for his treasured apple trees, his garden, his kids – and my granny. It was all he wanted – all he needed I think.

He was a remarkable man. He was a great man. I still miss him even now. And want to pass these stories onto my kids… He inspired me, and as a man, because of these stories I never gave up on finding love… If they could go through what they went through to find it – I could to. And I have. Finally.

Who exacly are these ‘Internet Entrepreneurs’ Jeff Norton, Kenosha, WI