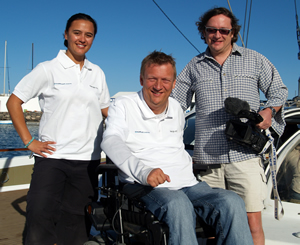 One thing not that few people in my current circles know about me was that I originally did a degree in photography – but never chose to follow it as a career. I’ve taken on the occasional project over the years (usually under duress), and have taught the subject (far more appealing to me than the pressures of professional photography) in higher education both in the UK and US… I still keep my hand in for my own pleasure and amusement and sell the occasional image through photo libraries.

I recently wrote about Geoff  Holt’s bid to become the first quadriplegic sailor to cross the Atlantic having met him a few short weeks ago. Over dinner one evening this came up in conversation – a couple of days later Geoff and his PR company asked me to take the official departure pictures of the crew and the boat to be distributed that day to the press.

I don’t normally do things like this, but as it was Geoff, I found it hard to refuse – he has a way with gentle persuasion! Of course I was happy to give my time to help… If I do do photography for someone else – it tends to be stuff like this I won’t charge for, either not for profit or charity work. 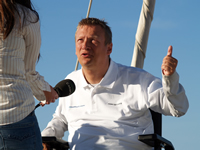 I have to say – I did enjoy doing it for a change. And, once a photographer – always a photographer. I still get a kick out of seeing my work in print in the national press and around the Internet with a credit.

Geoff has now completed the voyage and arrived safely home in the UK a couple of days ago. You can read all about it on his blog at www.geoffholt.com.

Christmas! The root of all evil?