Update on the Cesar Millan training… 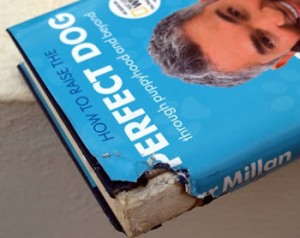 I wrote recently after acquiring our new dog – Pepper – about how we were employing the Cesar Millan training methods for the two books we had bought – How to Raise the Perfect Dog and Cesar’s Way.

Here’s a bit of an update…On the whole, with the odd glitch as you can see – it’s working out pretty well. Both of the boys are way better on the lead, and generally behave pretty well together. They do occasionally have issues with each other and get a bit boisterous – but we expected that with them both being dogs.

I’ve read one of the books – must get around to the other – and pretty much watched most of everything he’s done for TV. It works – it really does. Though I do wonder sometimes that he seems to have something very special about him, almost a ‘Doctor Doolittle quality’, that we mere mortals can never hope to emulate. The man has a gift!

Is it just me…? Alan Gandy – Burnt out car