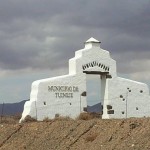 Here is a recap of Alan’s Day Five of his Siete Islas Charity Walk. It is the third part of the Fuerteventura section.

Firts of all… a couple of special thankyou messages to people who helped Alan last night in Nuevo Horizonte.

Alan set off early today, with the plan of keeping as many hours free in case he felt able to do a 5o kilometer day. However, his back has continued to give him some trouble – and so he stayed sensible and cut the length down to 30 kilometers.

He stopped at a little industrial estate just northwest of Gran Tarajal, and that is where he will start from again tomorrow morning for another slog of a day. Tonight he staying at the Hostal Tamonante in Gran Tarajal – so no doubt he’ll upload a piccie of that later on. He has been out and had a bit of a wander about – and says it’s quite nice. Very Spanish… and he’s off to a Farmacia for some painkillers… and then out for a bite to eat.

You can see where he walked HERE

HELP NEEDED!! Do any of you have contacts close to “Costa Calma”? Someone who can offer Alan a bed for the night tomorrow (Thursday)… somewhere he can plug in his phone for charging… and if possible a hot meal? Or in Morro Jable on Friday? If so, could you please telephone me (Elle) on 664085499 or email me on elle@gandy-draper.com. Every free night and meal helps keep the costs down. We are also seeking anyone who can help in Gran Canaria (contact me direct for the route). Thanks!