Is this a way to get rid of the BNP? 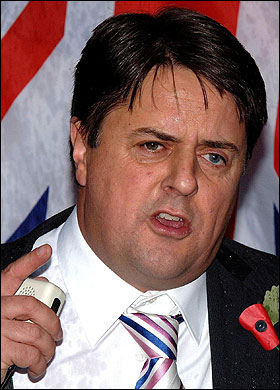 Like most other clear thinking Brits I watched Nick Griffin of the BNP (British National Party for our American friends) on Question Time recently. I hadn’t approved of him being on – but in the end I think it was right to give him ‘enough rope to hang himself’ – which he duly did.

In my (and many others – it seems) opinion he showed himself to be a poorly educated, fascist, racist, anti-Semitic, KKK loving, bigot… It’s insulting to most intelligent people to hear this man of all people spouting on about democracy!

It occurred to me whilst watching, that if (and let’s be honest it´s a big if) the BNP constitution is changed to allow black and Asian members to join – if every black and Asian and clear thinking ‘indigenous’ person (the BNP description) in Britain joined – there would be enough new members to vote the BNP out of existence.

Now wouldn’t that be a lesson in democracy for the BNP! I wonder if it’s possible – so started up a Facebook group to see if the idea could take off…

Of course it wouldn’t finish them, they’d be back in another guise – but hell,wouldn’t it be a major setback in their attempt to go ‘mainstream’ with their fascist brand of politics!

Obama gets the Nobel Peace Prize – what on earth for? Lest we forget…