Most people who know me will be aware that in February of 2011 I walked from the North to the South of the island (71.3 km) and in doing so managed to raise some money for charity. I didn’t particularly set out to do this in aid of charity but thought whilst I was doing it I might as well see if I could get some sponsorship. 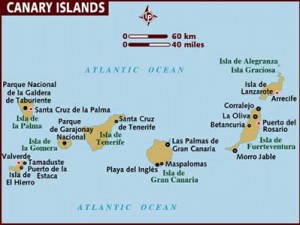 In total it raised  £1305.67 for two charities, Niños del Tercer Mundo – a charity based on the island which funds projects in the third world, and the Rose Road Association – based in the UK, who provide services to severely disabled children and their families. I’m really proud to have been able to help both of these fantastic organizations.

When I got back, quite a few people asked me, “What next” ? Most suggesting Iron Man – not a chance, not for me, I would have considered it but, but there are two big reasons that I couldn’t do it even if I wanted to;

1. I don’t particularly like running, plus after playing squash for a number of years my knees wouldn’t take it.

2. Perhaps more challenging for me; I can barely swim!

My answer at the time was along the lines of “That’s it for now”! However, in the couple of months following February I started to play with a few other ideas for things I’d quite fancy a crack at. Some insane, some not (Elle ruled out one or two of my suggestions as I am not sufficiently insured!).  Perhaps I’ve got the ‘bug’ as one friend put it. And, I’m now planning for another little ‘expedition’.

In spring of next year I’m planning to do ‘Siete Islas’, again on foot. Starting with Lanzarote and starting again at Orzola, moving on to Fuerteventura, Gran Canaria, Tenerife, La Gomera, El Hiero and finishing on la Palma. Estimated distance is somewhere between 400 and 500km. The date is yet to be confirmed but I am looking at setting off mid-April.

I’ve already had an enormous amount support from several of people, and would like to say a big thank you to;

David White, the Managing Director of AxiaFX – one of the currency exchange companies we use from time-to-time who has very kindly covered my equipment and travel expenses. He’s pledged a sum of money, any remainder of which (an encouragement for me to blag as much as I can! :)) will be donated to the two charities. You may find it interesting to know that David is a Trustee of the Charlton Athletic Community Trust and he has a strong belief in education through sport.

Mitch Mitchell, the well known personal trainer in Lanzarote who is helping me with training for the walk and has designed a training program for me. I’ll be working more closely with Mitch as the time approaches. I first met Mitch a couple of months ago, and haven’t been anywhere as near as disciplined as I should have been since. Downside being I could be further along than I am – the upside being that I have stopped drinking (completely), improved my diet (but could do so further), and been doing some (if not as much as Mitch would have me do) exercise. I also have a date in my head for stopping smoking – and as I’d planned to do this in February again but have had to schedule for April for personal reasons, in a sense I’m not behind in my own warped mind. Now it’s public, the hard work really begins.

Elle, for letting me have the time off from our business, Gandy-Draper, to indulge myself!

I’ll be posting regular updates on this site, my Facebook page, and Twitter as time goes by leading up to next April.