A female friend of mine intimated to me some years ago that I should have been born a girl because I have such great taste in bags! I should point out that I’m not talking handbags here, it came about because, she considered, I had a knack for picking bags with all the right features and pockets for the job in hand. I have quite a collection of rucksacks and camera bags kicking around. 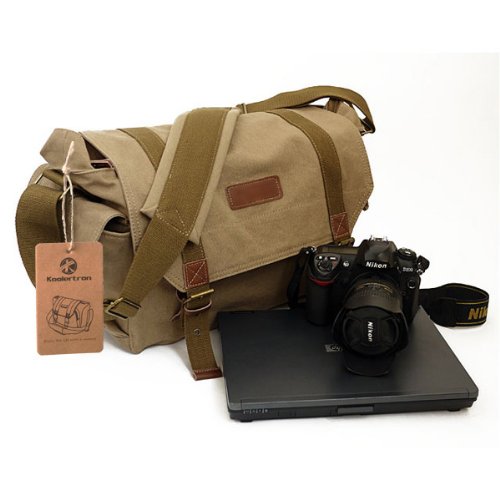 I recently bought a new Nikon DSLR that came, amongst other things, bundled with a camera bag. I hated it the moment I saw it. So started looking around something more to my taste. I’m not a fan of rucksacks for cameras, mostly because I hate having to take the bag off  and place it down in order to simply change a lens. For this reason I prefer shoulder bags as you can realistically use them on the move.

I’m also not a fan of camera bags that have, in big yellow writing, ‘steal me’ written all over them. Okay, it may not actually say steal me, but the large Nikon logo is just as effective for attracting the attention of potential thieves.

So I started digging around looking for a canvas shoulder bag that offered a certain level of discretion.

Much as I’d love a high-end Billingham camera bag

, which would most definitely be my bag of choice were money no object, I can not justify spending a couple of hundred quid on a bag. I’d much rather use the cash to get myself out and about to do some photography.

In the end I decided to chance it with the bag you see here, it’s called a “Koolertron

“. Yes, I’d never heard of it either, and yes I agree, it’s a pretty stupid name more befitting a robot in a Transformer movie than a camera bag. I also saw the purchase as a bit risky as it was coming from China. I haven’t had good experiences buying from China on Amazon before!

But, convinced by the reviews of previous buyers I gave it a shot, and I’m glad I did as it fits my needs perfectly. If you’re looking at the price of £16.99 thinking ‘my god, that’s cheap’, it isn’t. It’s one of those situations where the seller has crazy postage charges – so including delivery it cost me just over £40 to have it delivered to me in Spain. Fine for me, as that was about the budget I was allowing, and about what I think this bag is worth.

Delivery, amazingly was within a week, and the bag was exactly as described. The stitching is good and, given my past experience and it’s origins, it is very well made and looks like it will last a good amount of time. It’s big enough to fit plenty in, has a laptop pouch, and comes with foam inserts big enough to protect your camera and a couple of lenses. Don’t expect the zipped mesh pockets and other little storage features for all your smaller items you might get in a conventional camera bag. I also wouldn’t want to put it’s resistance to wet conditions to the test but it works perfectly for what I want it to do.

Don’t just take my word for it though, have a look at the reviews of it on Amazon

, they’re what helped make my decision.

Rainbows and Unicorns! What is it with stupid job titles?

“Some Of The Most Powerful And Heartbreaking Photos Ever Taken…”

I must be an old-school photographer!