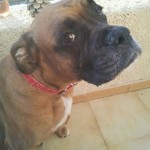 Here is a recap of Alan’s Day Fifteen of his Siete Islas Charity Walk. He rested today in Los Cristianos… had a radio interview… and went for a trip to Mount Teide.

If you have been following Alan’s progress, you will know that he reached Playa de Las Americas yesterday afternoon / evening. From there he was collected by our friend Stephen, who took him to Los Cristianos.

Stephen’s lovely wife, Cathy, had a shepherd’s pie ready for him… and have spoiled him rotten since he arrived. He got to meet their Boxer Dog, Oscar – and apparently the two of them got on fantastically! They took him to The Irish Times last night – and he thoroughly enjoyed himself. It was good for him to be able to relax a little before the next leg of his walk.

Today, he went along to Coast FM radio station, and was interviewed by Ray Wilde who runs the Saturday lunchtime slot there.  Here is a short snippet of video from the show (thanks to Stephen for recording this)

After the show, Alan, Stephen and Cathy went up to Mount Teide – probably Tenerife’s most famous and beautiful feature.

Many thanks to Stephen and Cathy for looking after Alan so well! There’s a spare room here for you any time you want to pop over of course!!!